Everyone has their kink. 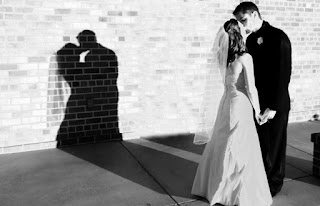 The bright harsh light was making her sweat.

"Can we get on with this?"  She snapped as she sipped her ice tea.

"Yes, just hold on a little longer, the sun is almost perfect."  The photographer answered.  "Trust me, this will be the perfect picture."

"Can't you just Photoshop it?  I am going to have get my dress dry cleaned before the wedding I am all sweaty."  The bride lifted her arms and fanned at her smooth armpits.

The photographer ignored her and watched the shadows creep up the brick wall.  The groom was sitting and playing on his phone, ignoring everything.  Taking wedding pictures was never his calling but he was good at it and it paid the bills.

"Ok, lets get ready,"  he said.  The groom remained motionless as the bride put down her iced tea and stood on her mark.  The groom, still engrossed in his phone, did not move.

"Come on Greg!"  she barked, "put down your damn phone and stand up."

The groom looked up, "I have to set my lines, hold on."

The photographer watched the shadow creep ever up the wall, in a moment the shadow would fade and the moment would be over.  He watched as the groom sat motionless.  "We will lose the light..."

The groom sighed and stood up, stuffing his phone in his back pocket.  She took his hands and pulled him to the correct spot.

"Ok," the photographer said, "now, lean in and kiss her, lightly...just hold the pose for a moment."

The groom sighed and leaned in.  Their lips met.

The camera clicked as he captured the moment.  Taking extra and a few different angles.

"Is that all?"  the muffled question came from the groom, his lips still motionless against his bride.

"Shut the fuck up you asshole, you said you would do this."  the bride answered in the same muffled way.  "Your breath stinks anyway, stop breathing so hard."  She added.

You could audibly hear him breath out against her face, "fuuuuucccckkk  yooouuuu."

As he took the last photo and the shadow faded just slightly the bride pulled back and pushed the groom away.

"We are done, thank you."  the photographer said, not wanting to have to witness another 'happy couple' argue.

He could hear them bickering as they walked back to their car.  Sitting for a moment he pulled the pictures up on his camera and reviewed them.  They were good, as always.

He packed up his gear and walked back to his car.  The large SUV, most likely belonging to the parents of the 'happy couple' was still there.  As he got closer he could see it rocking slightly.  He pulled open the back door and packed his camera away.  The high pitched squeal coming from the SUV caused him to turn his head and look.

In the tinted window he could see the bride riding her groom in the back seat.  Perfect breasts exposed and dress bunched up around her.  He shook his head as he got into his car and drove away.

Everyone has their kink....

Posted by Peter Princip at 7:15 AM